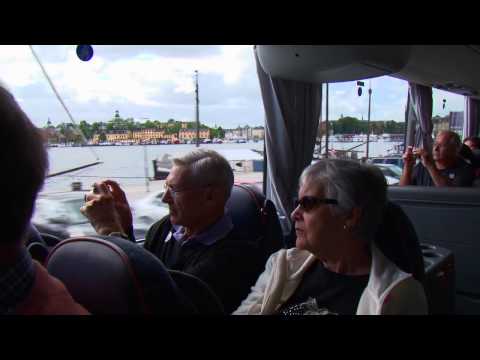 Meet your guide and start your tour with a short panoramic drive of Stockholm. Continue to the imposing City Hall, renowned for its architecture, murals and which is the site of the Nobel Prize Banquet. Completed in 1923, this building is the result of a 12 year effort by artists and craftsmen. Pass through the city center to the neighboring Island of Djurgarden, regarded as Stockholm's outdoor recreation center, with Grona Lund Tivoli, Skansen Open-Air Museum and extensive park lands beyond.


While on the island, visit the museum of the Swedish warship ‘Vasa’, once considered one of the world’s largest and the pride of Sweden's mighty navy. The present museum is built around the 17th century warship which sank in Stockholm's inner harbor on her maiden voyage in 1628. Its discovery in 1956 and subsequent salvage in 1961 is one of the most important events in marine archaeology. Painstakingly restored to much of its original magnificence, ‘Vasa’ represents an authentic piece of living history. You'll also pass by the Old Town before returning to the pier.

Note: City Hall may close with short notice due to special events.