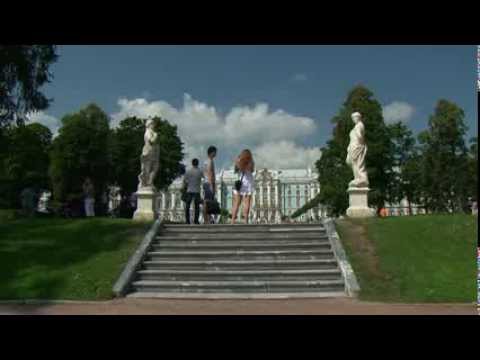 A one hour drive to the Tsar’s Village in Pushkin takes you through Moscow Prospect, then on the Kiev Highway to the Egyptian Gates, the entrance to the Tsar’s Village. Catherine’s favorite palace is without a doubt one of the masterpieces of world art. Peter the Great presented this estate to his wife Catherine in 1710, and on it a small palace was built by the architect Braunstein. From this time until the time of the last Russian Tsar, it was used as the summer residence of the Royal Family. In 1756, it was expanded in the Baroque style.


The palace contains a series of magnificent rooms, including the famous Picture Gallery and, of course, the Great Hall and the famous Amber Room. The parks of the estate add to the splendor of the palace and several have a number of charming pavilions. Among them are the Grotto Pavilion and the Hermitage. The town of Pushkin is known not only for its remarkable palace and parks, but for the man it was named after. Since 1937, it has been named after Alexander Pushkin, the most celebrated poet in the country.

Note: Not recommended for persons with walking or climbing difficulties. The palace is not wheelchair accessible due to the steep staircase, absence of elevators and long walking distances. Expect congestion and waiting at attractions. New security regulations require that all visitors to most museums and cathedrals go through metal detectors before entering. Tour participants who have implants that cannot go through metal detectors, must carry a medical ID card or other medical documentation; otherwise, access to the location may be denied.

Tours with this activity level involve a considerable amount of physical activity such as substantial walking over cobblestone streets, uneven or steep terrain, climbing stairs, or extended periods of standing. Not recommended for guests with physical limitations. Comfortable, sturdy shoes are recommended.
Have Questions About Your Shore Excursions?
We're here to answer them. Call us at the number below to speak with a Shore Excursion Specialist.
1300 255 200
1300 255 200
Bonaire Marine Park SCUBA Experience (2-tank dive)
Chichen Itza Mayan Ruins
Back to top