A Day In Jerusalem 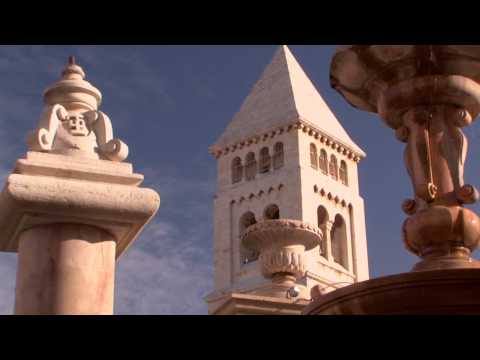 A Day In Jerusalem

This tour offers an excellent overview of Jerusalem as you learn about the age-old story of Judaism and the almost eternal conflict of words and deeds, while retracing the steps of Christ.


Boarding your comfortable coach at the pier, you'll begin your day by leaving Ashdod behind and ascending into the Judean Hills. As you travel to Jerusalem, you will pass by Ramot, one of Jerusalem's newer suburbs, while on your way to Mt. Scopus. At the summit of the Mount of Olives, you will be treated to a breath-taking view of the Old City, Temple Mount, the Golden Gates, the Church of the Ascension, Pater Noster and Dominus Flevit. Traveling back to the base of the Mount, you will find the picturesque Gardens of Gethsemane, site of an ancient olive oil press yard that is surrounded by 1,000 year-old trees. At this location you will also find the impressive Church of All Nations where a visit is included.


Your coach will next proceed past the city walls and on to the Kidron Valley. From here you will have a view of Absalom's Tomb and the Tomb of Zacharia. Continuing along the eastern walls of the city, you'll enjoy a spectacular view of Kind David's City before arriving at the Dung Gate where you'll disembark your coach and walk to the famous Western Wall, the holiest site in the Jewish world because it is believed to have been closest to where the Holy Ark once stood. On your way, you will be able to see the Southern Wall excavations.


After what will surely be a memorable morning of sight-seeing, you'll be transferred to a local hotel for a relaxing buffet lunch. Following lunch, you'll re-join your coach and head to West Jerusalem to see some of Israel's most well-known landmarks, such as the Jerusalem Theater, the State President's residence, the Israel Museum, the Knesset (Israel's Parliament), the State Supreme Court and the Hebrew University. Next, it's a drive through Mea Shearim, a Jewish orthodox quarter where the old traditions and customs dominate the pace of life. This wide-ranging tour concludes with a leisurely drive back to the port in Ashdod.

Note: The sights on this tour are not wheelchair accessible and therefore, it is not available to wheelchair guests. This tour includes approximate 1 1/2 hours of walking and/or standing, some of it on an incline. Those with mobility concerns are cautioned to evaluate their personal level of ability and stamina. Lightweight clothing, a hat and flat, comfortable walking shoes are suggested. When visiting the religious sites, your head must be covered and conservative attire is required. Shorts and sleeveless shirts are not permitted. The order of sites visited may vary.