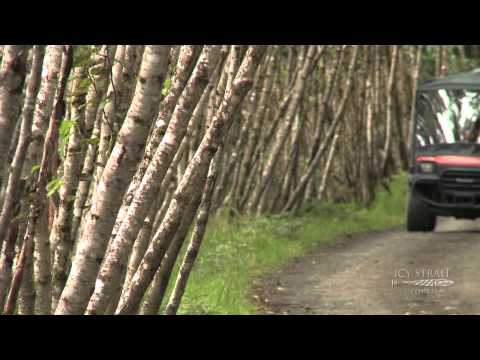 There is no better way to experience Alaska’s rugged terrain than by driving an ATV (All-Terrain Vehicle) through the forests and mountains on Chichagof Island. Following a short orientation on how best to operate an ATV in the Alaskan wilderness, you will set off on your outdoor adventure. The entire island (America’s fifth largest) lies within the limits of the 17-million-acre Tongass National Forest, which has the distinction of being America’s largest national forest. The terrain ranges from seaside estuaries to alpine mountain peaks, and you will have plenty of chances to stop and view the gorgeous scenery. With its remote location and limited accessibility, Chichagof is home to some of the animals most often associated with Alaska. In fact, the island has the world’s largest brown bear population, estimated to be three bears per square mile. You might also see bald eagles soaring above, land otters, Sitka black-tail deer and red squirrels.

Note: Please note that time spent in ATV is approximately 60 minutes. Participants must be at least 6 years of age. To drive, participants must be at least 25 years of age with a valid driver’s license. This tour is not recommended for those with back or neck problems or pregnant women. Min weight is 27 lbs, max weight is 275 lbs. Guests who go ashore do so with the understanding that they will be mixing with members of the general public. Limited number of 4-seater ATVs available upon request. **For dates beginning in 2023 and beyond, an All Access Pass will be included with your tour.**

Tours with this activity level involve a considerable amount of physical activity such as substantial walking over cobblestone streets, uneven or steep terrain, climbing stairs, or extended periods of standing. Not recommended for guests with physical limitations. Comfortable, sturdy shoes are recommended.
Have Questions About Your Shore Excursions?
We're here to answer them. Call us at the number below to speak with a Shore Excursion Specialist.
+912271279333
+912271279333
Ultimate Island Tour & Explorer Cruise
CASTLE MIRAMARE GARDENS & TRANSFER TO TRIESTE AIRPORT (DEBARK)
Back to top