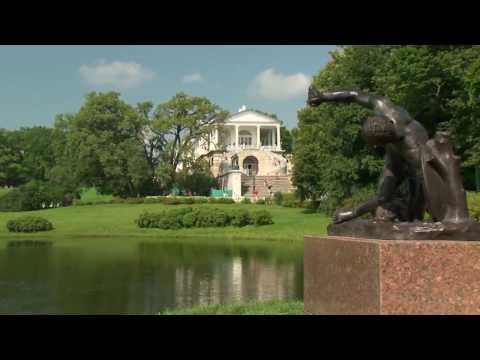 In the morning your tour takes you outside of the city to the historical town of Pushkin. The drive will take you to the Egyptian Gates, the entrance to the Tsar’s Village in Pushkin. Catherine’s Palace in the Tsar’s Village ranks as one of the masterpieces of world art. Peter the Great presented the estate to his wife Catherine in 1710 and on it, a small palace built by architect Braunstein. From this time until the time of the last Russian Tsar, Tsar’s Village was used as the summer residence of the Royal Family. In 1756, Bartelomeo Rastrelli expanded the palace in Baroque style. Its grandiose, white and gold facade stretches 978 feet.


The palace tour takes you through the series of magnificent rooms, including the famous Picture Gallery, the Great Hall and the world famous Amber Room. The parks of the estate add to the splendor of the palace, and several of them are embellished with a number of charming pavilions. The town of Pushkin is famous not only for its remarkable palace and parks, but the man it was named after – Alexander Pushkin. He was the most celebrated poet in the country and a resident of this town at the beginning of the 19th century.


After the tour, you’ll continue to one of the dining venues for lunch after which, you’ll drive back to the city for a tour of the Hermitage Museum, the largest art museum in Russia and the most prestigious museum in the world. The Hermitage Museum occupies the Winter Palace, the winter residence of the Russian Tsars and four more buildings.

Note: This tour is not recommended for persons with walking or climbing difficulties. There are long walking distances through the gardens of Pushkin. Catherine’s Palace is not wheelchair accessible due to the steep staircase and no elevators. There is extensive walking between different parts of the Hermitage. Expect congestion and waiting at attractions. Flash photography is prohibited in the Hermitage.

Tours with this activity level involve a considerable amount of physical activity such as substantial walking over cobblestone streets, uneven or steep terrain, climbing stairs, or extended periods of standing. Not recommended for guests with physical limitations. Comfortable, sturdy shoes are recommended.
Have Questions About Your Shore Excursions?
We're here to answer them. Call us at the number below to speak with a Shore Excursion Specialist.
800-040-1182
800-040-1182
Mallorcan Medley
Twilight Zipline
Back to top