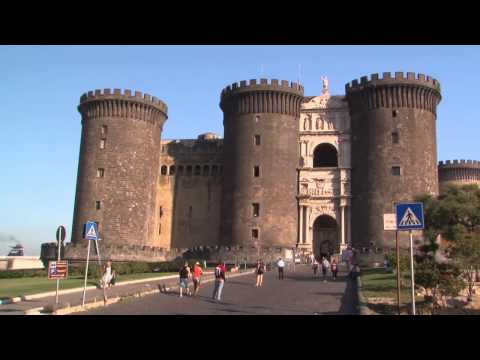 Behold some of the most iconic landmarks in Naples and admire sweeping views of the bay and ever-looming Mount Vesuvius on this enlightening driving tour around the city.


After departing from the pier, you will soon arrive in the heart of Naples for a meandering drive through the vibrant metropolis, the third most-populated in Italy. You can almost feel the energy as you watch countless mopeds zipping through the urban sprawl and throngs of Neapolitans going about their daily lives. It’s this irrepressible energy and spectacular backdrop of architectural gems and panoramic views that give Naples its charm.


From the comfort of your seat, you will pass landmarks such as the lavish Royal Palace, one of four residences used by the Bourbon Kings who ruled in the 18th and 19th centuries. Nearby stands the San Carlo Theater, an ornate world-class opera house that has become a revered symbol of Naples.


Depending on the route, you may also see the glorious Naples Cathedral and the National Archaeological Museum, which holds one of the world’s finest collections of Greek and Roman antiquities. Many of the objects were unearthed during excavations of Pompeii after it was buried in ash and pumice following the eruption of Mount Vesuvius in 79 A.D.


Later, from atop Posillipo Hill, you will enjoy a magnificent view the still-active volcano, Naples and its crescent-shaped bay. You will also have the chance to look about on your own during free time downtown before returning to the pier.

Note: The tour is available to wheelchair guests who have a collapsible wheelchair, are able to make their own way on and off the coach and have an able-bodied companion to assist them. Weather appropriate clothing; sunglasses; and flat, comfortable shoes are recommended.

Tours with this activity level involve walking over relatively level terrain, possibly some cobblestone, gravel, or a few steps. Comfortable shoes are recommended.
Have Questions About Your Shore Excursions?
We're here to answer them. Call us at the number below to speak with a Shore Excursion Specialist.
010 8976519
010 8976519
Hop On Hop Off Sea Taxi
Aix En Provence
Back to top