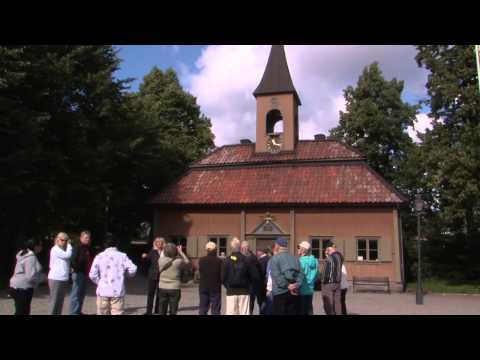 Drive through the central parts of Stockholm, view the dominating Royal Palace, the Parliament building, the Opera and more. Continue to the nearby island of Djurgarden, where the number one attraction in Stockholm is located - the Vasa Museum. Visit the museum, housing the warship Vasa, once the pride of Sweden’s mighty navy. On her maiden voyage in 1628 she capsized and sank in Stockholm’s inner harbor. In 1961, after 333 years at the bottom of the sea she was salvaged and is today restored to much of her original magnificence.


Continue through the northern outskirts of the city and through the scenic countryside en route to Sigtuna, an idyllic little town, an approximate 45 minute drive north of Stockholm. Sigtuna was founded around 980 AD on the threshold of a new age as the Viking period became the medieval period. Sigtuna became the first Christian town in Sweden, a centre of the new religion. In the 13th century, Dominican friars built the first brick church, St Mary’s. Since the 16th century, it has been the parish church. Enjoy some free time before returning to Stockholm and the pier.

Note: There are cobblestone streets in Sigtuna.

Tours with this activity level involve a considerable amount of physical activity such as substantial walking over cobblestone streets, uneven or steep terrain, climbing stairs, or extended periods of standing. Not recommended for guests with physical limitations. Comfortable, sturdy shoes are recommended.
Have Questions About Your Shore Excursions?
We're here to answer them. Call us at the number below to speak with a Shore Excursion Specialist.
0333 2412319
0333 2412319
City Highlights & Leisure Time
Scenic Stockholm, SkyView & Vasa
Back to top