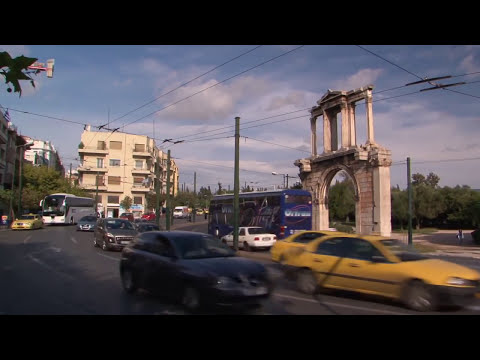 Following a narrated drive passing by a host of Athens' major sites, you'll proceed to the Monastiraki area, a flea market neighborhood in the old town of Athens and one of the principal shopping districts. You'll find clothing boutiques, souvenir shops and specialty stores. It's a major tourist attraction for bargain shopping. In the square, is the Pantanassa Church Monastery. Your tour continues with a visit to the New Acropolis Museum, an archaeological museum focused on the findings of the Acropolis of Athens. The museum was built to house every artifact found on the rock and its feet, from the Greek Bronze Age to Roman and Byzantine Greece.


The museum lies on the archaeological site of Makrygianni and the ruins of a part of Roman and early Byzantine Athens. After visiting the museum, you’ll proceed to the picturesque Plaka District, an old historical neighborhood of Athens. The Plaka District is clustered around the northern and eastern slopes of the Acropolis and incorporates a labyrinthine of streets and neoclassical architecture. Here you’ll have time to explore on your own. You'll find cobbled pedestrian lanes that are lined with shops, boutiques, jewelry stores, souvenir stands, tavernas, cafes, and flea market stalls.

Note: There is approximately 1/2 mile of walking over cobblestones and approximately 20 steps on this tour. Temperatures can reach extreme highs during summer months, we recommend that you drink a lot of water and use sun protection.

Tours with this activity level involve a considerable amount of physical activity such as substantial walking over cobblestone streets, uneven or steep terrain, climbing stairs, or extended periods of standing. Not recommended for guests with physical limitations. Comfortable, sturdy shoes are recommended.
Have Questions About Your Shore Excursions?
We're here to answer them. Call us at the number below to speak with a Shore Excursion Specialist.
+912271279333
+912271279333
Gold Nugget, Sled Dogs & Exclusive Scenic Railway
Ultimate Oregon Coast
Back to top