← Back to All Press Releases

Over $100,000 Awarded To Schools In Honor Of Norwegian Joy's Debut In North America During Teacher Appreciation Week

Norwegian Cruise Line, the innovator in global cruise travel, awarded cruises to 30 educators as well as thousands of dollars to their schools as part of its Giving Joy campaign, an effort to reward teachers who inspire students and bring joy into the classroom.

The month-long campaign, which recognized the powerful connection between travel and education, launched in advance of the newly revitalized Norwegian Joy’s North American inaugural sailing during Teacher Appreciation Week (May 6- 10, 2019). The 30 teachers with the most votes won a seven-day cruise for two and were provided with airfare and accommodations for an award ceremony in Seattle on May 3, 2019. There, the three grand prize finalists were awarded with $25,000, $15,000 and $10,000 for their schools. 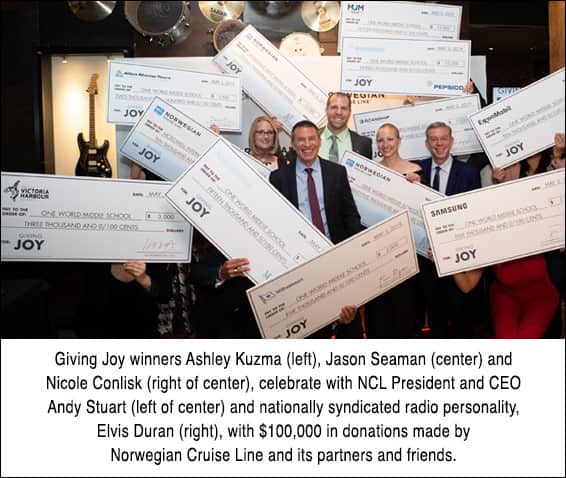 The grand prize winners are:

Conlisk was surprised with additional prize money for her school thanks to Norwegian Cruise Line partners and others who were moved by her story and the Giving Joy campaign. In addition to the $25,000, Conlisk walked away with:

Education technology company Nearpod, the comprehensive Student Engagement Platform, and its recently-acquired Flocabulary business, offered 30 year-long Platinum memberships ($10,470 value) and 30 year-long Lite memberships ($3,600 value) respectively to the 30 winners. Nearpod is also extending a three-month Gold membership trial for any teacher, using the code “NP-GivingJoy.” In addition, the teachers were rewarded with $100 hotel coupon codes ($3,000 value) from Expedia Group; $100 Norwegian Cruise Line gift cards ($3,000 value) courtesy of iHeartMedia for winners to use onboard during their cruise; and $50 gift cards ($1,500 value) from Costco Travel. PepsiCo donated $5,000 towards the “Big Moment of Joy” event and Chateau Ste. Michelle provided the wine for the evening.

“I could not be happier with the tremendous response our Giving Joy campaign has received,” said Norwegian Cruise Line President and CEO Andy Stuart. “Through this effort, we were able to raise awareness of the important work teachers do every day and reward truly amazing educators for their meaningful contributions.”

The teachers were invited to join a public pier side celebration at the Port of Seattle’s Bell Street Pier prior to Norwegian Joy’s first sailing from Seattle, Wash. The event featured a performance by Norwegian Joy’s cast of “Footloose;” the live music of Caety Sagoian and band; a dance performance from the Northwest Tap Connection youth program; free Starbucks beverages; and a variety of family-friendly activities including a ‘Wall of Joy,’ which invited attendees to share what brings them joy. To recognize the occasion, the mayor of Seattle also proclaimed the day, May 4, 2019, as the “Day of Joy.”

“I’ve been a part of the cruise industry for over 30 years and I can’t remember a time when we launched a ship with so much joy,” said Stuart. “We have been sailing from Seattle for 20 years - the first cruise line to do so - so I am tremendously grateful to the Port of Seattle for their partnership and to Mayor Jenny Durkin for the proclamation of “Seattle Day of Joy!”

As the 15th ship within the Norwegian Cruise Line fleet, Norwegian Joy made her U.S. debut following an over $50 million renovation, bringing her amenities and experiences nearly identical to her sister ship, Norwegian Bliss. She features an extended go-kart track, enhanced gaming and virtual reality complex – Galaxy Pavilion – and new dining and bar venues.

Link to Event Images and Assets

As the innovator in global cruise travel, Norwegian Cruise Line has been breaking the boundaries of traditional cruising for over 52 years. Most notably, the cruise line revolutionized the industry by offering guests the freedom and flexibility to design their ideal vacation on their preferred schedule with no assigned dining and entertainment times and no formal dress codes. Today, its fleet of 16 contemporary ships sail to nearly 300 of some of the world’s most desirable destinations, including Great Stirrup Cay, the company’s private island in the Bahamas and its resort destination Harvest Caye in Belize.  Norwegian Cruise Line not only provides superior guest service from land to sea, but also offers a wide variety of award-winning entertainment and dining options as well as a range of accommodations across the fleet, including solo-traveler staterooms, mini-suites, spa-suites and The Haven by Norwegian®, the company’s ship-within-a-ship concept.