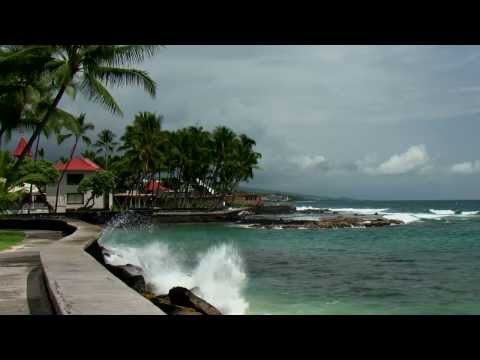 Board your air-conditioned motorcoach for a narrated drive through beautiful Kona. The white sand beaches, lush green foliage and dramatic lava formations captivate visitors lucky enough to travel along the Kona coastline.

Home to coffee plantations and macadamia groves, historic Kona is a thriving community with natural splendor and a lively culture. For truly dramatic views, to the southeast lies Hawaii Volcanoes National Park, home to volcanoes Mauna Loa and Kilauea - one of the most active in the world.

Your guided tour takes you for a visit to Pu'uhonua O Honaunau, which translates to "Place of Refuge at Honaunau." This enchanting cultural site is a lovingly restored ancient Hawaiian religious sanctuary. Built in 1650, the "Place of Refuge" originally housed the bones of Hawaiian chiefs. It later became a place of sanctuary for outlaws and defeated warriors. Highlights in this national historic park are the great Ki'i figures guarding the temple, the spectacular flora and fauna and the sense of peace and tranquility that echoes through the area.

A wide variety of Kona's famous coffees are on display at the Royal Kona Coffee Store. Refresh yourself with a sample and learn about the distinctive flavors in Kona's legendary brews. Coffee beans have been grown in the region since 1828. The nutrient-rich volcanic soil of Kona as well as the island's elevation and climate create ideal conditions for growing flavorful, quality coffee. You will have an opportunity to purchase some beans as a souvenir.

Continue through picturesque towns and villages, along magnificent coastal vistas and past historic landmarks and attractions. You'll return to port for the “sea” portion of your tour. Your guided historical lunch cruise on a 65’ catamaran will capture your imagination and reveal secrets of the Big Island when ancient, powerful kings ruled the rugged and fertile land of the Hawaiian Islands. Unwind along the way and enjoy a deli-style lunch and beverages or enjoy your favorite libation from our full-service cash premium bar. Our Historian will share Hawaiian history, stories and legends relating to the numerous landmarks along 12 miles of Kona coastline. You'll visit famous points of interest including the Ahu'ena Heiau, Holua Slide and the Kaumo'o Battlefield. There's an excellent chance of seeing marine life during your cruise and even humpback whales if you're with us during December-March. Enjoy live Hawaiian style music during the narration breaks and the entire trip back to the Kailua Pier.

Note: All efforts will be made to view marine life, but sightings cannot be guaranteed. A full-service cash bar is available for an additional charge. Guests must be at least 21 years of age and show a valid ID in order to consume alcohol.